Another weekend of Premier League football has come and gone, with Spurs slipping up and Manchester City continuing their charge at the top of the league. Brighton pushed Manchester United all the way, whilst Chelsea and Liverpool played out a 1-1 draw. As always on a Monday, we’ve taken a look through our Sports Hub to see the top stories from social media that you might have missed. The best thing about them is that you can research them all in 5 minutes!

Mo Salah opened the scoring on Saturday evening, helping his Liverpool side to a 1-1 draw against reigning champions Chelsea. The Egyptian winger has been one of the best players in the Premier League so far this season, but his lack of celebration after scoring had some puzzled. There seems to be contention over the reason for his lack of celebration: some believed it was as a mark of respect for his compatriots who were killed in a terrorist attack earlier in the day, whilst others believed it was because he previously played for Chelsea. Suffice to say that the two different interpretations envoked very different responses…

Mo Salah refuses to celebrate his goal out of respect for the victims of the Sinai mosque attack yesterday ❤️🇪🇬 pic.twitter.com/zsIqo1Fgtp

Salah didn’t even play 20 games for Chelsea but he won’t celebrate a goal against them? 😂 Nonsense that.

Charlie Austin scored twice on Saturday to help Southampton to a 4-1 victory over Everton, marking his first start of the season with an impressive double. Austin saw a positive upswing in the sentiment reaction to him as a result, with an increase in positive sentiment of 22%.

Understandably, Austin also saw plenty of positive reactions to his performance too. 53% of emotion bearing tweets about him were “liked” by users, with a further 17% expressing “love”.

After Liverpool threw away a 1-0 lead, Liverpool fans were quick to blame manager Jurgen Klopp for his poor game management, arguing that he let the side down yet again. The German has been a success at Anfield largely speaking, but the negativity surrounding the result on Saturday evening suggests Klopp might need to start making a real title challenge or face the wrath of the Kop.

Klopp's subs are late. They always are.

As usual poor substitutes and bad game management from a Klopp has cost us the game. Get out of my club before you do more damage #KloppOUT

When we compared conversation from this week against last week, there were some players who really saw a significant boost to the conversation about them. Simon Mignolet saw the biggest increase after he let in Willian’s cross-shot, whilst Willian himself also made the top 5. Ashley Young and Charlie Austin both made positive impacts, helping their sides to victory, whilst Nicolas Otamendi was lucky that his own goal against Huddersfield didn’t cost Manchester City victory.

You might have seen our team of the week in the past, with a full 11 players lined up across the pitch. Did you know we can also change the line-up to make it a 5-a-side team? Well, now you do! Mignolet and Willian both made the side, as did Mo Salah, after they were the key protagonists on Saturday night. Victor Lindelof and Ashley Young were also part of the team, thanks to Young’s goal and Lindelof’s outstanding performance. Some were suggesting that Saturday might even have been a break-out performance for Lindelof after a slow and disappointing start to his United career. 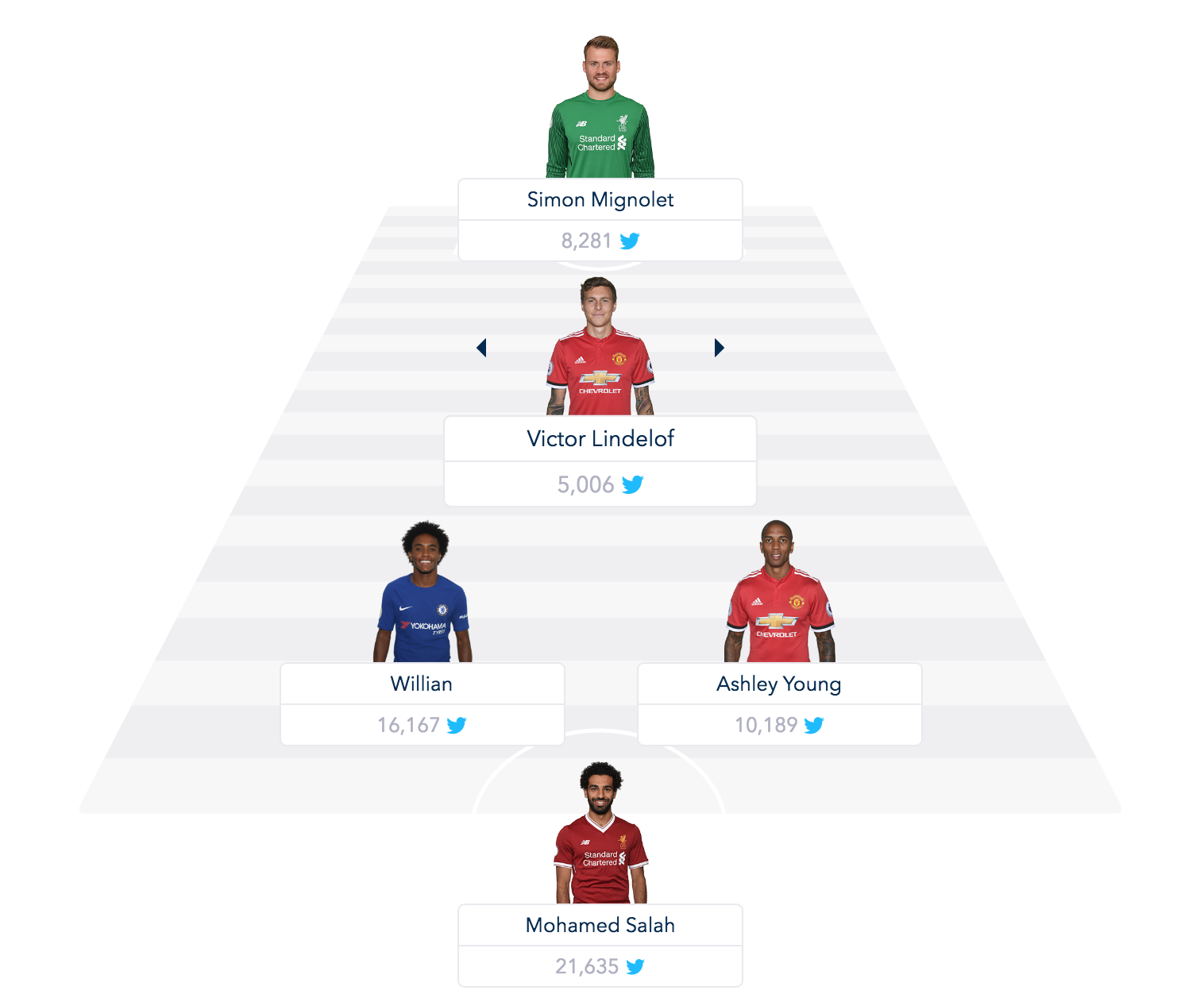 If you want to find out more about how our hub can provide you with interesting and engaging insights and content, contact Ali at alistair@blurrt.co.uk