The Advert calendar is back again! We’re getting right into the Christmas spirit here at the Blurrt Offices, and the good news is that I may have won the battle to get Christmas music played in the office as early as Monday! So which Christmas advert is the talk of the office today?

This time, we’re dissecting arguably the most controversial Christmas advert this year. Tesco’s adverts have come under a lot of criticism in the past, with 2016’s not Nessa-ssarily getting a ‘Stella’ response from TV watchers (sorry, I couldn’t resist!), and it seems the last popular Christmas advert for Tesco was all the way back in 2013, where a family was followed through 20 years of Christmases. So what was the conversation like from the beginning of November to the release of this year’s advert?

Surprisingly, there was only one tweet discussing the advert before its release. The tweet links to a Sun article, and with no positive or negative sentiment it’s safe to say there was no real anticipation for this year’s advert.

When is the Tesco Christmas advert out? Date and predictions for the supermarket's festive … https://t.co/flHp4qgZhf

When the advert was finally released on the 6th of November, conversation increased in our sample data by 500%. The advert, the first of 5, focuses on how different families cook their Christmas turkey. It shows a diverse range of families, proving that everyone does Christmas a little bit differently. The initial reaction was positive, however throughout the course of the day sentiment evened out with 17% positivity and 17% negativity (66% neutral). The leading emotion word was ‘love’, although there was some scepticism about the use of Muslim families in an advert celebrating Christmas.

In the days following Tesco’s advert release, the conversation increased again by over 3050% in our sample data, and the virality of Twitter has proved itself once again.

Tesco responded to backlash with a spokesperson saying “Everyone is welcome at Tesco this Christmas and we’re proud to celebrate the many ways our customers come together over the festive season.”
They said that the Christmas campaign “will celebrate the many ways we come together at Christmas, and how food sits at the heart of it all”.
However there was even more backlash after that point, with users saying they would boycott the supermarket. There was a 57% negative reaction to the advert, with only 10% positivity (33% neutral).

It's almost as if @Tesco have deliberately made this advert just to piss people off.#BoycottTesco 🎣🎣🎣 https://t.co/xIrw5tCGlG

There was some positivity to be found though. Some users praised the diversity shown in the advert, expressing love and happiness.

A Muslim family & gay dads in the Tesco Christmas ad.
If you stop what you're doing & listen very carefully you might be lucky enough to hear a Daily Mail reader explode.

@LBC Whats the problem with Muslim family displayed celebrating Christmas on Tesco advert?? As a Turkish Cypriot our family has celebrated Christmas all our life and will continue ! Well done @Tesco @NickFerrariLBC

The best Xmas advert to date. As a British Sikh 👳🏽this is the best reflection of today's U.K. To complain about this is a disgrace & promoting segregation. Welldone 🇬🇧 #Tesco #BritishXmas🌲

So, what was the most reacted-to tweet we collected in our sample data? With over 350 retweets and 4,800 likes at the time of publication, this user expressing positivity and love for the advert shows that happiness can be found, even in the darkest of times.

Apparently (a small minority of) people are upset with the @Tesco advert because there are Muslim people in it. How ridiculous. Why not just enjoy Christmas and love everyone <3

So what’s the conclusion? Well we searched and trawled through Twitter to find the earliest mention of this year’s Christmas advert, and we found this tweet from back in September placing a bet on who would be the first supermarket to release a Christmas advert (spoiler alert – it was Asda).

Me and mum have got a bet about who will be the 1st supermarket to show a Christmas advert this year. Mum reckons @Tesco I think @AldiUK

How about anticipation? With hardly any tweets talking about the christmas advert in the run up to release, we can safely say that John Lewis’ advert was more anticipated than Tesco’s. 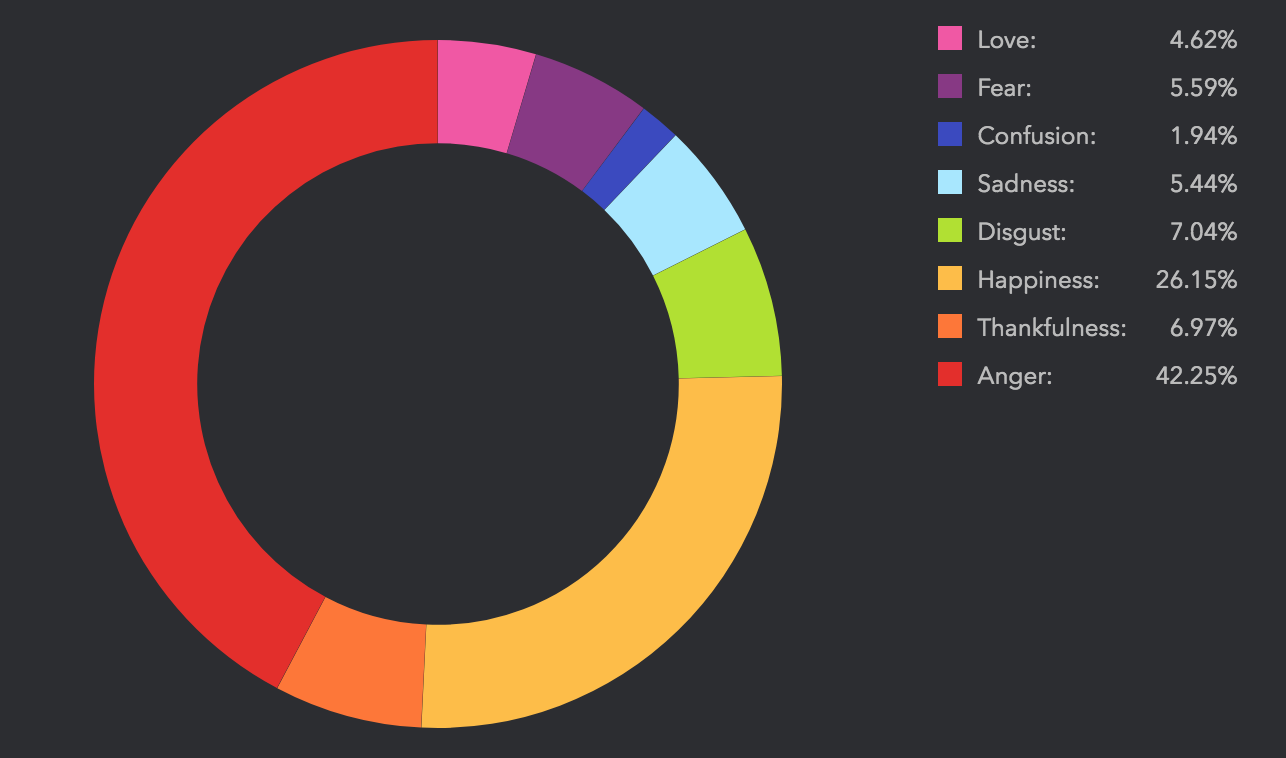 Finally, how popular was it? Our sample data shows that nearly a quarter (24%) of all our advert tweets mention Tesco, which is a huge amount. It might not be strictly popularity as much as high volume, but Tesco is definitely a behemoth of the Christmas advert market.

So how does Tesco compare to John Lewis? We’ve already discussed that John Lewis had a much more anticipated advert, and is certainly odds on to be our winner in the sample data. However, it seems like there was a much higher amount of emotionally driven tweets about Tesco than John Lewis, with 33% of Tesco’s sample tweets containing emotion compared to 23% for John Lewis. Popularity-wise, it seems that John Lewis is the winner in this section of the competition, as they have 11% more tweets than Tesco and a higher proportion of those tweets are positive.

It certainly seems that, at the moment, John Lewis is leading the charge in the battle for the Christmas ads!

Tune in soon to find out how Tesco compares to our next Christmas advert!