Today is International Women’s Day, a worldwide event which celebrates all women’s achievements and acts as a catalyst for change in regards to gender equality. The day has been celebrated since 1909, when the first National Women’s Day was celebrated on the 28th February in the United States. Today it is a rallying point to build support for women’s rights and participation in the social, political and economic arenas. It is not affiliated with any one group, but brings together governments, women’s organisations, corporations and charities.

No matter where you are, who you are, or how powerful your influence – you can #PressforProgress by taking tangible action to help accelerate women's equality. Start with being inspired by this https://t.co/QkTWSBPgKv for #IWD2018 pic.twitter.com/On2VVUx2Vt

This year the theme of International Women’s Day is #PressForProgress. This movement came from findings in a report from the World Economic Forum in 2017 telling the world that gender parity is over 200 years away. There is a strong call to motivate and unite friends, colleagues and communities to think, act and be gender inclusive. This year’s #PressForProgress sponsor is EY, a professional service firm providing assurance, tax, consulting and advisory services to companies.

How will you #PressForProgress on International @WomensDay? In every moment, no matter how small, we can all take action. #IWD2018 #WomenFastForward https://t.co/m8lTa1weuS pic.twitter.com/mx2drH2hQM

Since Monday 5th March 2018 we have been collecting a sample of worldwide tweets focusing on the keywords #PressForProgress and #IWD2018, and tweets centered around the phrase ‘International Women’s Day”. At the time of going to press we have collected over 110,000 tweets with an overall sentiment of 53% positive tweets ( 6% negative, 41% neutral).

Some of the most talked about topics in this campaign are, as expected, #IWD2018 and #PressForProgress, however #TimeIsNow and ‘Gender Equality’ were also high in the topics. #TimeIsNow got over 4,100 mentions in our sample data, providing us with 4% of total tweets. Users were using the hashtag to indicate a time for change in different areas of equality. Nicolaj Coster-Waldau used the hashtag to show forced marriages and ask for change, and his tweet gained over 450 retweets and nearly 1,600 likes. ‘Gender Equality’ got a total of over 2,700 mentions in our sample data, and is 2.5% of total tweets. The term appears in many tweets with other hashtags, like #TimeIsNow and #MeToo. Sadiq Khan used the term to remind his followers that the fight for true gender equality is not finished, and what he as Mayor of London will do to help that.

15 million girls younger than 18 are forced into #marriage each year. If we don’t act now, #by2030 this number will grow to 16.5 million. #TimeisNow to provide opportunities for our girls. Happy International Women’s Day! #IWD2018 #UNDP pic.twitter.com/kxm3Qac6pa

International Women’s Day is a reminder that the fight for true gender equality is not over. As we mark the centenary of the first women in the UK securing the vote, lets redouble our efforts to remove the barriers women still face #BehindEveryGreatCity #PressforProgress #IWD2018 pic.twitter.com/zYV71HHai9 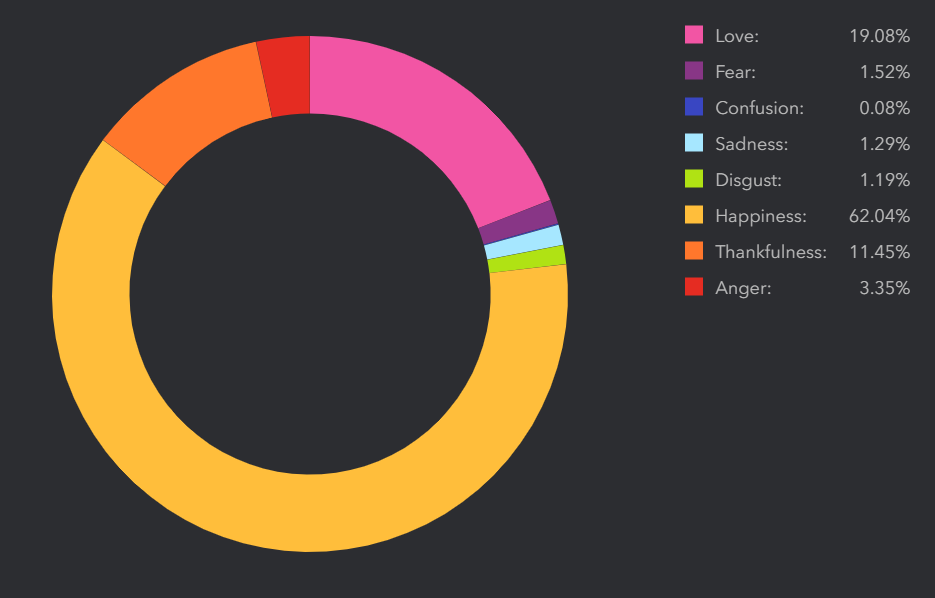 Happy International Women's Day! This prominent woman of science inspired me to become the chemist I am now. #InternationalWomenDay https://t.co/O3tJjal72v

To all international women whether u r killing it, acting for change, showing up or just getting through. 💪🏽💕 #sistahs #collective #change #support #IWD2018 pic.twitter.com/1TWWLqwhvP

It is unsurprising that so many large influencers are talking about International Women’s Day, as it is a worldwide event. CNN is the largest verified influencer, with over 39.6 Million followers.

The Taliban banned these women from being journalists. Now they run an all-female TV station: https://t.co/tZq8d2CqqZ #AsEquals #InternationalWomensDay pic.twitter.com/SzNCozQy8I

Another large influencer is Sagarika Ghose, who contributed 4 times and has 3.8 Million followers.

On #IWD2018 and #WomensDay lets not only celebrate exceptional lives but pledge to work towards a society that is humane, just and strives for equality, where we shun revivalist nativism that glorifies narrow identities and work towards modern progressive humanism

There has also been a lot of engagement surrounding International Women’s Day, with @Barbie getting over 6,800 likes and over 3,300 retweets from the following tweet:

In honor of #InternationalWomensDay, we are committed to shining a light on empowering female role models past and present in an effort to inspire more girls.

@Barbie announced on the 6th of March that they have created a series of Barbie dolls based upon inspirational women. They asked people to join the conversation with #MoreRoleModels and it ties in with their new line of ‘I Can Be’ dolls, ranging from pilot to astronaut.

With so much global conversation we thought we would give you a run-down of the Top 10 Tweeting Countries. This data is comprised of geotagged tweets which make up 64.5% of all our sample data.

In tenth place is South Africa with 1.9% of geotagged tweets. They have 55% positive sentiment (8% negative, 37% neutral), and their top trending emotion is ‘happy’ featuring in 21% of all tweets. One trending topic is #HoldMyBeer, which is being used in conjunction with #IWD2018 as a stand of solidarity against a controversial opinion taken towards Dineo Ranaka, a South African TV presenter, who was told that women shouldn’t drink beer.

My money, my choice, my rules, my mouth, my liver, my system, my life! They just FOH with all that nonsense 🙄. #HoldMyBeer #InternationalWomensDay 🚺 pic.twitter.com/4gsogeXQgp

A top influencer in South Africa is Karabo Mokgoko, a popular blogger, who tweeted 36 times about International Women’s Day.

In ninth place is Ireland with 2.3% of geotagged tweets. They have 61% positive sentiment (4% negative, 35% neutral), and again their top trending emotion is ‘happy’, featuring in 20% of all tweets. The most prominent trending topics are #RepealThe8th and #VotesForRepeal, which relate to Irish abortion laws. These topics take up 6% of all tweets geotagged in Ireland.

A top contributor in Ireland is Margaret E Ward, the CEO and founder of Clear Ink, who contributed 6 times in our data collection.

On #iwd18 we need to talk about #womenonboards and why #inclusion and #diversity need to be on every board’s risk register. https://t.co/tHtUy2bBu1

In eighth place is Kenya with 2.4% of geotagged tweets. They have 56% positive sentiment (7% negative, 37% neutral), and their top trending emotion is ‘happy’, featuring in 20% of all tweets. The most prominent trending topic is #GirlsNotMothers, relating to the education system in Kenya, and asking for more education for teenagers on sexual health.

A top contributor in Kenya is @YasminTaurai who has contributed 7 times in our data collection to their 7,900 followers.

In seventh place is Nigeria with 2.6% of geotagged tweets. They have 63% positive sentiment (7% negative, 30% neutral), and again their top trending emotion is ‘happy’, featuring in 26% of all tweets. The most prominent trending topic after #PressForProgress and #IWD2018 is #LetsTalkGBV, relating to the Gender Equal Opportunity Bill in Nigeria.

i'm very sure this bill provides sustainable development for our country. I really hope it is passed. #LetsTalkGBV
I urge everyone to join this conversation and #PressforProgress https://t.co/tX1YVyE3Fj

A top contributor in Nigeria is Kori Habib, who has contributed 25 retweets in our data collection.

Communities women are not left behind in the March, they also want their rights protected at any given point in time #PressforProgress #PressforGEOBill #TimeIsNow #IWD2018 pic.twitter.com/QSw0aWWdS3

In sixth place is Canada with 2.7% of geotagged tweets. They have 56% positive sentiment (5% negative, 39% neutral), and their top trending emotion is, again, ‘happy’ which features in 7% of all tweets. The prominent trending topic for Canada is #MyFeminism.

"I have heard individuals say that I might be a one-term MP because I continue to speak up about issues, and I accept that. I accept that because #MyFeminism requires me to be bold… It requires me to smash and challenge the status quo. "#IWD2018 @Women_Canada @Empire_Club pic.twitter.com/gKxI5ab2KC

A top contributor from Canada is Greg Johansen, who contributed 11 times in our collected data.

In Toronto, Prime Minister @JustinTrudeau will receive the 2018 Catalyst for Change Award and will deliver remarks at the @EqualVoiceCA #InternationalWomensDay lunch #cdnpoli #IWD2018https://t.co/Pw2sKLd0Ql

In fifth place is Pakistan with 3.4% of geotagged tweets. They have 37% positive sentiment (5% negative, 58% neutral), and their top trending emotion is ‘happy’, featuring in 5.2% of all tweets. The prominent trending topic is #PPPEmpowersWomen, relating to the Pakistan People’s Party announcing that they would organise rallies to celebrate International Women’s Day.

Popularly known as the Iron Lady of Pakistan opened the doors of politics for women in Pakistan. Not only did she become the first woman to head a major political party become the first and till date, the only female Prime Minister of Pakistan #KarawaneBenazir #PPPEmpowersWomen pic.twitter.com/GVqPdVIcqe

A top contributor from Pakistan is @FidaShaikhPPP, a journalist for Benazir news, who has contributed 49 times in our data collection.

In fourth place is Australia with 8% of geotagged tweets. They have 58% positive sentiment (8% negative, 34% neutral), and ‘happy’ is their top trending emotion, featuring in 16% of all tweets.

A top contributor from Australia is @SallyRMelb, who has contributed 14 times in our data collection.

“One of the earliest and most confusing lessons I learned was, it doesn’t do to show how clever you are. That would be shameful. Boys don’t like girls who are smarter than them.”#IWD2018 https://t.co/ZOBvk8xFt2

In third place is USA with 9.6% of geotagged tweets. They have 55% positive sentiment (6% negative, 39% neutral), and again ‘happy’ is their top trending emotion, featuring in 11% of all tweets. A top trending topic is ‘Barbie’, relating to the dolls barbie has released.

Barbie is going FULL ELLE WOODS rn. People thought she was just some silly blonde doll, and now she's out here respecting and acknowledging powerful women more than textbooks ever have…. YOU'RE DOING AMAZING SWEETIE!!! https://t.co/6iQuq4rqpx

A top contributor from USA is Tanya Guyatt, a writer and blogger, who contributed 6 times in our data.

In second place is India with 14.6% of geotagged tweets. They have 44% positive sentiment (5% negative, 51% neutral), and ‘happy’ is their top trending emotion, featuring in 13% of all tweets. A top trending topic is #TheFirstWoman, relating to the Indian Border Security Force inducting their first female.

With her getting inducted into the #BSF, the Indian Border Security Force now has 2.5 lakh men and 1 woman. Do you know her name? #TheFirstWoman #InternationalWomensDay #MakeLifeBetter @Contest_Hub @india4contests pic.twitter.com/bSTfTSDJSY

A top contributor from India is the official account of ADG Zone Bareilly Police, who have contributed 23 retweets in our data.

In first place is the United Kingdom with 27.9% of geotagged tweets. They have 63% positive sentiment (6% negative, 31% neutral), and again ‘happy’ is the top trending emotion, featuring in 19% of all tweets. An interesting trending topic is #ThisGirlCan, a celebration of active women funded by The National Lottery.

A top contributor is the twitter account for the Women’s March London, who have contributed 16 times in the collected data.

'The suffragettes were force-fed, beaten and imprisoned for calling for the right to vote'
The Centenary Action Group was formed this year to join in solidarity and to amplify all our voices.
Please share this letter widely for #InternationalWomensDay
We Stand Together https://t.co/k57TqXTxPO

So there you have it, our analysis of what’s been happening on Twitter in the run up to and on International Women’s Day 2018. There’s undoubtedly a sense of happiness and celebration around the day, as women from around the world unite to celebrate the progress that has been made and remind everyone that there is still some way to go before true equality has been achieved!

If you want to find out how we can help you understand the social media story of current affairs, product launches or advertising campaigns, contact Becca at becca@blurrt.co.uk