Another week at number 6 in the office league suggests that Blurrton Albion need some impetus, but with transfers not having gone our way in recent weeks it’s been difficult to make progress. Our lowest scoring player is often the player we just brought in, or we’ve picked up players who have been suspended. If this happens again next week, maybe it’ll be time to play our first wildcard of the season… 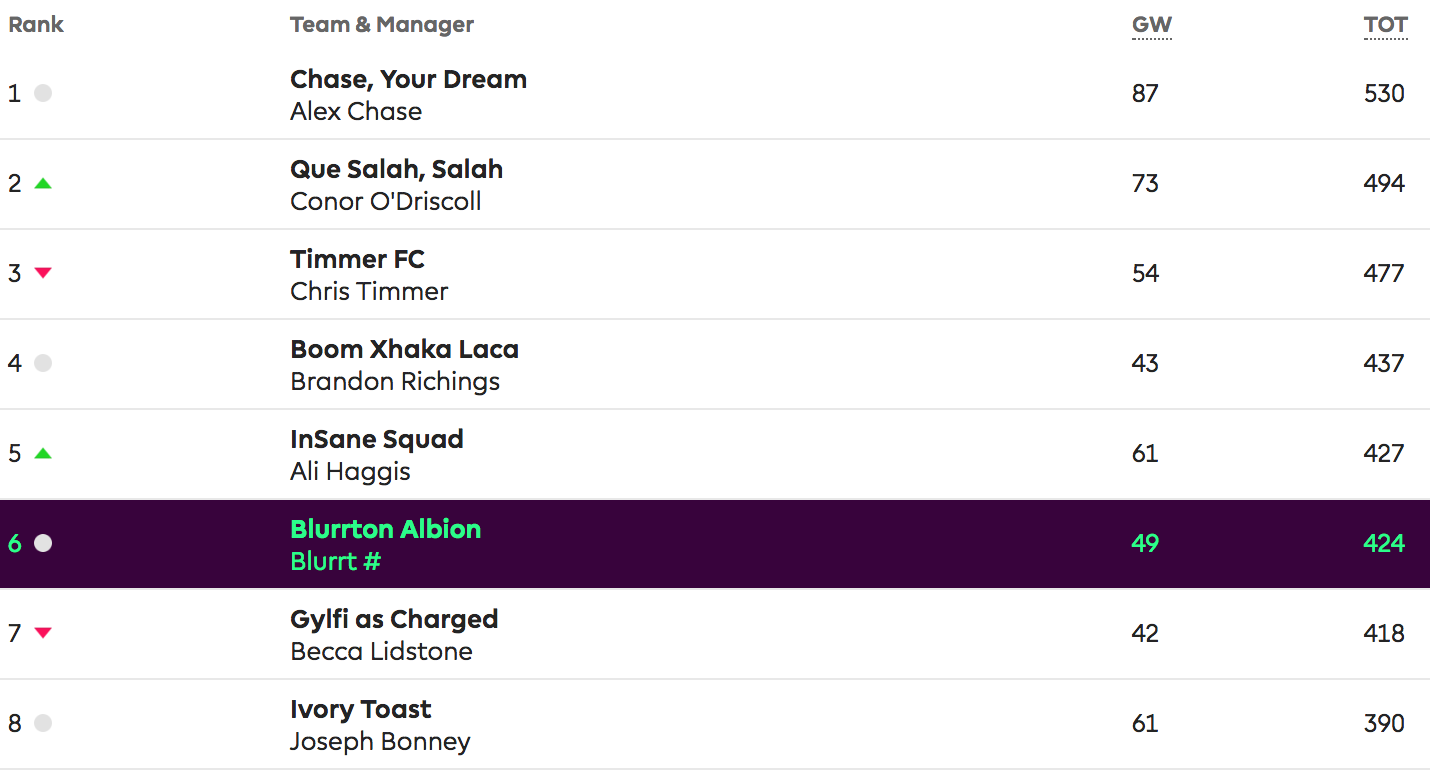 Well, he doesn’t, but he was our joint lowest scorer this week as he didn’t get a kick against Spurs at Wembley. Scoring 0 put him in prime position for the chop, althought it wasn’t a clear cut decision thanks to Alberto Moreno (1,538 tweets) and James Milner (1,265 tweets) also scoring 0. The two Liverpool defenders were both responsible for the 4 goals conceded by their side, meaning that the three Liverpool players in Blurrton Albion’s squad all scored 0. Solanke, however, was the least talked about of the three players (326 tweets), meaning he will once again be transferred out of the side.

Blurrton Albion are still sitting comfortably in sixth place thanks to a week in which they scored 49 points, enough to take them above Becca’s Gylfi as Charged but slipping below Ali’s InSane Squad, in a strange reversal from last week. Captain David de Gea (7,803 tweets) conceded 2 goals away at Huddersfield, as title contenders Manchester United came unstuck against the Premier League new boys. Romelu Lukaku (9,766 tweets) also failed to make an impact, although he did get the assist for Marcos Rashford’s goal. It was a poor week all around for the defence though, as Marcos Alonso (756 tweets) only got one point after Chelsea conceded 2 at home to Watford and Ahmed Hegazi (97 tweets) only managed 2 points as West Brom lost 1-0 to Southampton.

The midfield had a better week, as Dele Alli (6,242 tweets) scored 9 points thanks to his goal and 2 point bonus, whilst Tiemoue Bakayoko (9,236 tweets) picked up 5 points after he assisted Chelsea’s fourth goal and Willian (6,216 tweets) also grabbed an assist to add four points to the total. New signing Tom Cleverley (559 tweets) played the full 90 minutes without adding any extra points. Mesut Ozil was the week’s top scorer for Blurrton Albion, adding 13 points thanks to his goal, assist and 3 bonus points! He was also the most talked about player on the team, with 34,687 tweets being sent about him during the game. That means he will captain the side next week. In attack, Alexandre Lacazette (19,433 tweets) scored to give him 6 points.

So with Ozil and Lacazette taking on the captaincy and vice-captaincy for next week, what other changes will be made? First off, Solanke will be replaced by Laurent Depoitre of Huddersfield. His goal against Manchester United made him the most talked about player under 5.3 million (8,768 tweets, 5.2 million) and sees him go straight into the starting 11.

Arthur Masuaku (202 tweets) is joined on the bench by Hegazi, who will be replaced by Milner in the starting 11. Cleverley drops to the bench to allow Depoitre in, meaning our 3-5-2 formation becomes a 3-4-3 for the new Game Week. 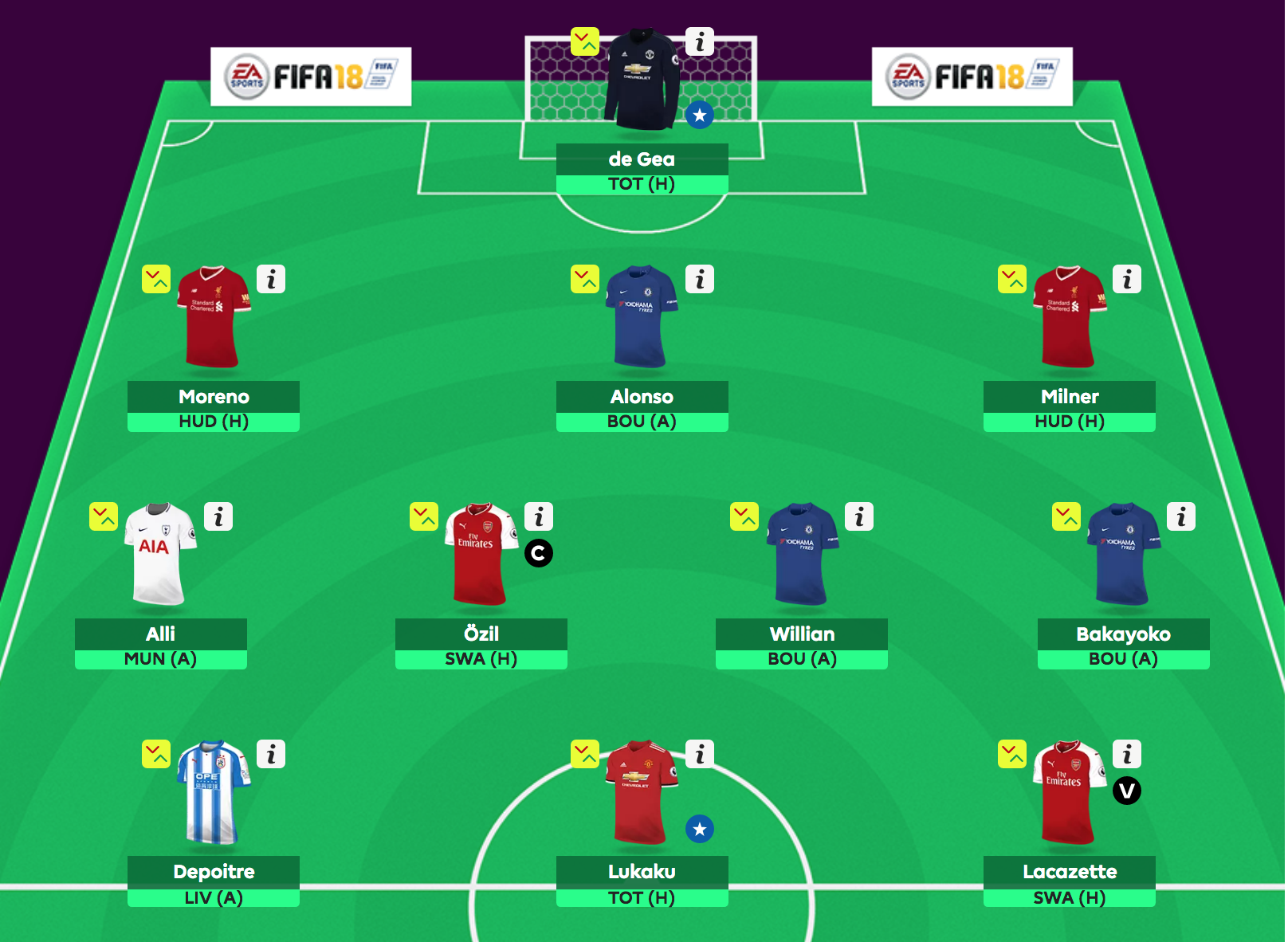 To find out more about how our Sports Hub can generate unique content, contact Ali at alistair@blurrt.co.uk