At Blurrt, we collect all the social media conversation surrounding Premier League players and have found a number of stories you may have missed from another weekend of top class action. The best part is that all of these stories can be found within 5 minutes using our incredible Sports Hub!

Sofiane Boufal scored a perfect 10 on the Blurrt score after his mazy dribble and calm finish won his side the game on Saturday evening against West Brom. The game was a drab affair, exemplified by the fact that none of the other players in that match got above a 5 on our social media ranking scale. Late in the game Boufal took the ball from deep inside his own half, past almost the entire the West Brom team, before slotting the ball calmly into the bottom corner of Ben Foster’s goal. Having only come on moments before as a late second half sub, the Moroccan made an impact almost immediately and made his feelings about being on the bench clear to his boss by celebrating right in front of him (but not with him).

It was a long time coming but boy was it worth the wait. A truly sensational goal from Sofiane Boufal.

Dejan Lovren was the most talked about player on Game Week 9 after his terrible performance for Liverpool against Spurs. 70,026 tweets were sent about Lovren, some of which were mocking and some which were brutal in their appraisal of his ability. After being subbed off early, a humiliating afternoon was complete for the Croatian centre back. In the social media age, however, it isn’t just in the stadium or on the streets where players have to deal with the wrath of fans. Lovren took much of his Instagram account down immediately after the game, but conversation on Twitter was harder to avoid – although he really would be best advised to, as our emotion donut shows. Anger (67% of emotion bearing posts) was the emotion of the day… 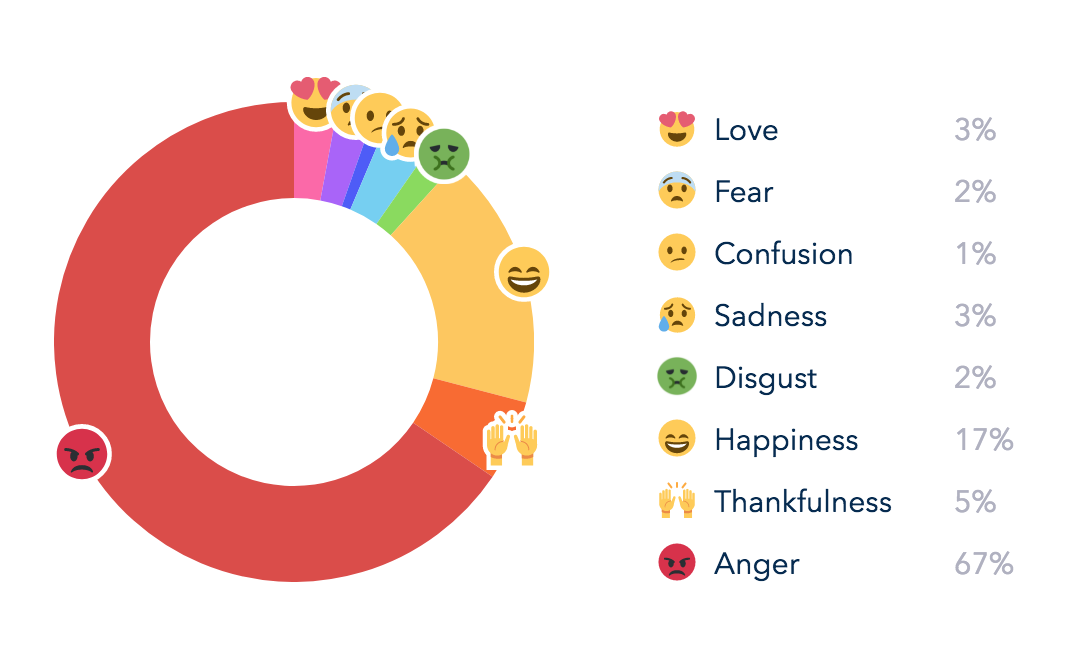 Batsman To The Rescue

Michy Batshuayi and Benjamin Mendy seem to be in a remote Twitter battle to see who can gain the most devout following on the social media site… Mendy is out with injury, as we reported last week, but this week he was overshadowed by 2 goal hero Batshuayi, who came off the bench for Chelsea and turned the game around for his side. He scored the equaliser and the fourth as his side came from 2-1 down and on Twitter after the game he carried on endearing himself to fans:

He even had the time to subtweet EA Sports, making it quite clear who he thought should be in this week’s Team of the Week on FIFA 18…

IF incoming tho 🤷🏾‍♂️

The Who’s Hot, Who’s Not section of the Hub has been throwing up some intriguing results in recent weeks, demonstrating just who is on everyone’s lips each Game Week. This week saw 2 Huddersfield players in the top 5, as Laurent Depoitre and Aaron Mooy respectively saw a 8,688% and 7,303% increase in the levels of conversation surrounding them after their goals led Huddersfield to a surprise 2-1 victory over Manchester United. Burnley goalkeeper Nick Pope had a solid game against Manchester City, helping to keep his side in the game. Burnley’s official account also made a joke when he saved a shot from Gabriel Jesus…

Jordan Pickford and Glenn Murray completed the top 5, although made the headlines for different reasons. Murray scored twice on Friday night as his Brighton side saw off West Ham 3-0 at the London Stadium, whilst Pickford was beaten 5 times as Everton fell to another harrowing defeat. The young England stopper had a reasonable game, however, earning him a mixed reception on social media.

We excluded last year’s top 6 teams and took a look at who the most talked about players of Game Week 9 were. 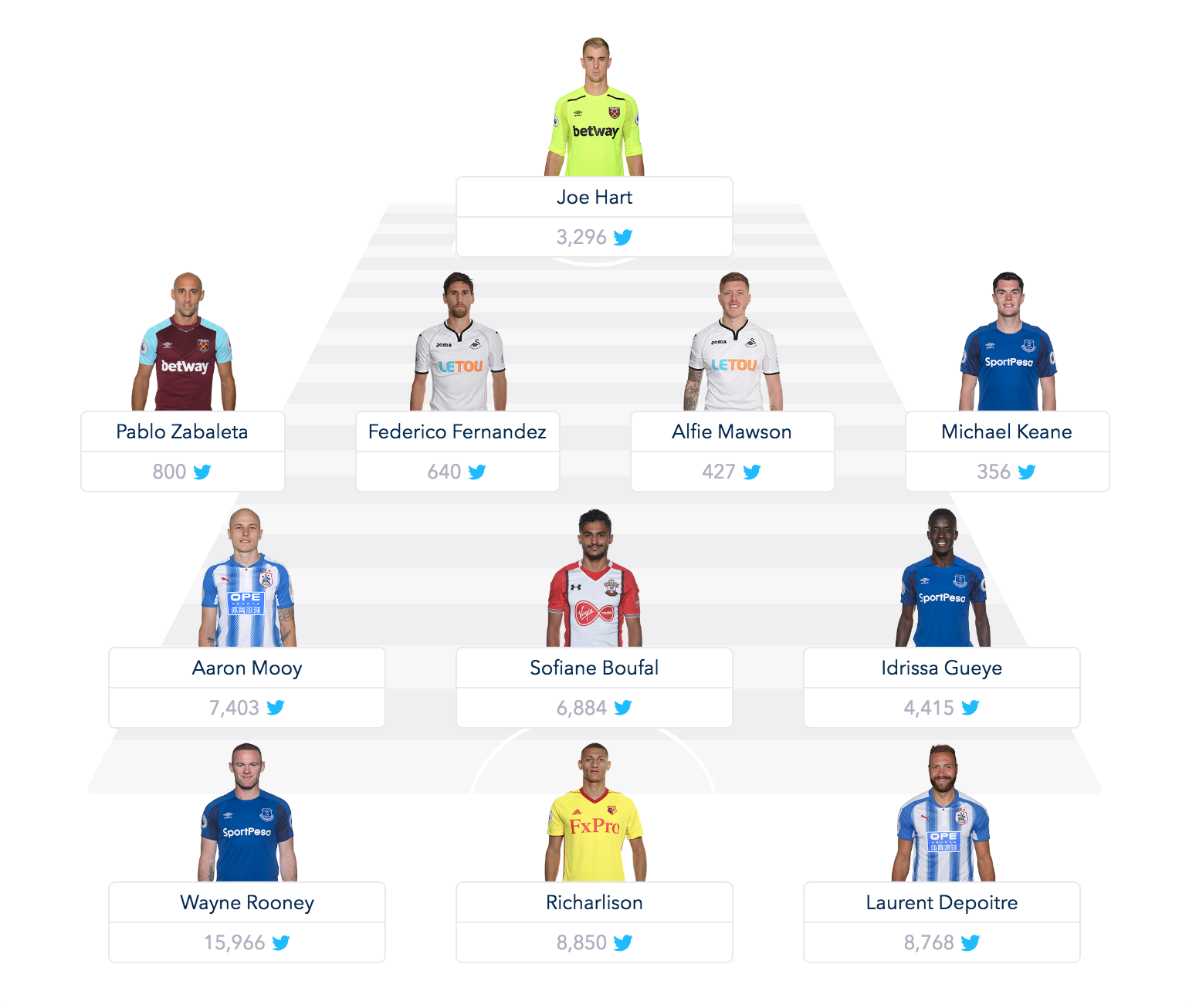 Joe Hart and Pablo Zabaleta had poor games as West Ham lost to Brighton, whilst Federico Fernandez scored an own goal and Alfie Mawson scored at the right end as Swansea lost 2-1 against Leicester. Michael Keane came in for criticism after Everton struggled defensively against Arsenal.

Aaron Mooy and Sofiane Boufal led the way in midfield after their goals helped their teams to victory, whilst Idrissa Gueye’s red card ensured he was in the most talked about team for all the wrong reasons.

Everton striker Wayne Rooney opened the scoring for his side, almost 16 years to the day after he scored his debut goal (also against Arsenal!). He was the most talked about striker, followed by Watford’s Brazilian star Richarlison. Richarlison should have had two goals but missed absolute sitters, costing his side the game against Chelsea. Arsenal fans angry after his “dive” last week will feel that karma came back strongly this week. Depoitre was the third most talked about striker after his goal put Huddersfield two up against Manchester United.

If you want to know how our Sports Hub could help your business, get in touch with Ali at alistair@blurrt.co.uk