What a week! Just when we thought the social media experiment had cemented sixth place in the office league for all eternity, some idiot comes along and risks it all for one week of free play! That particularly moronic move cost Blurrton Albion dearly this week, with the crowd-sourced team performing worse than average and dropping one position in the league. With only 3 points to make up to Becca’s side, Gylfi as Charged, there’s still hope for Blurrton Albion to push on up the table, but progress will need to occur sooner rather than later after the international break.

So what went wrong this week? Why did the idiot in charge decide now was the right time to mix things up, after weeks of solidity? Was the mediocrity he saw actually the ceiling for this side?

Defensive woes were a major issue for Blurrton Albion, with a grand total of 0 players getting a clean sheet and only David de Gea scoring more than the standard 2 points. De Gea picked up 4 points thanks to his 7 saves in Manchester United’s 1-0 defeat at Chelsea, whilst Ragnar Klavan scored 2 points as Liverpool won 4-1 away at West Ham. The rest of the defenders picked up 1 point each, with Sead Kolasinac, Dejan Lovren, Jonjoe Kenny and Antonio Rudiger all picking up solitary points after either conceding too many goals (Kolasinac and Kenny) or playing too few minutes (Lovren and Rudiger).

In midfield, Dele Alli’s withdrawal from Spurs 1-0 victory over Crystal Palace left a giant, playmaker sized hole in midfield, whilst Mohamed Diame also played 0 minutes so sat on the bench too. Captain Anthony Martial came on as a second half sub for Manchester United, meaning his fabulous 1 point was doubled to an incredible 2… Eden Hazard and Moussa Sissokho both scored 3 points as Chelsea and Spurs kept clean sheets.

Daniel Sturridge didn’t get a chance to impact the game as he stayed on the bench for the entirety of Liverpool’s comfortable victory on Saturday evening, meaning he also sat on the Blurrton Albion bench. Romelu Lukaku did play, picking up 2 points, whilst the main star of the show was Brighton’s Glenn Murray. The ageing striker clearly still has plenty of goals in him, as his bundled finish against Swansea proved enough for the Seagulls to claim another victory, earning Murray 8 points in the process.

So Blurrton Albion’s squad returns to normal this week after the free play boost (or rather, so-called boost), but we aren’t going to make any substitutions before the international break. We do need to pick the starting 11 for this week, however, meaning we need to turn to the Sports Hub to find out the top volumes from last week.

David de Gea (8,379 tweets) starts in goal as usual, after he was the most talked about goalkeeper in the league for the 4th game week in a row. Romelu Lukaku (27,332 tweets) was the most talked about player in the team, meaning he captains the side next week, whilst Alexandre Lacazette (22,644 tweets) takes on the vice-captaincy. Laurent Depoitre (19 tweets) drops down to the bench, taking the second bench slot after not making a huge impact on Twitter users in the last game week.

In defence, James Milner (586 tweets) and Alberto Moreno (349 tweets) maintain their starting positions alongside Chelsea’s Marcos Alonso (1,279 tweets). Arthur Masuaku (10 tweets) and Ahmed Hegazi (133 tweets) are on the bench, with Hegazi in the first sub’s position and Masuaku third.

The midfield sees all 5 players starting, giving Blurrton Albion a solid 3-5-2 look going into the next matchday. Dele Alli (1,047 tweets), Mesut Ozil (10,858 tweets), Tiemoue Bakayoko (12,084 tweets), Willian (1,210 tweets) and Tom Cleverley (2,139 tweets) all start, hopefully giving the side a boost of creativity and the opportunity to pick up plenty of assists and goals. 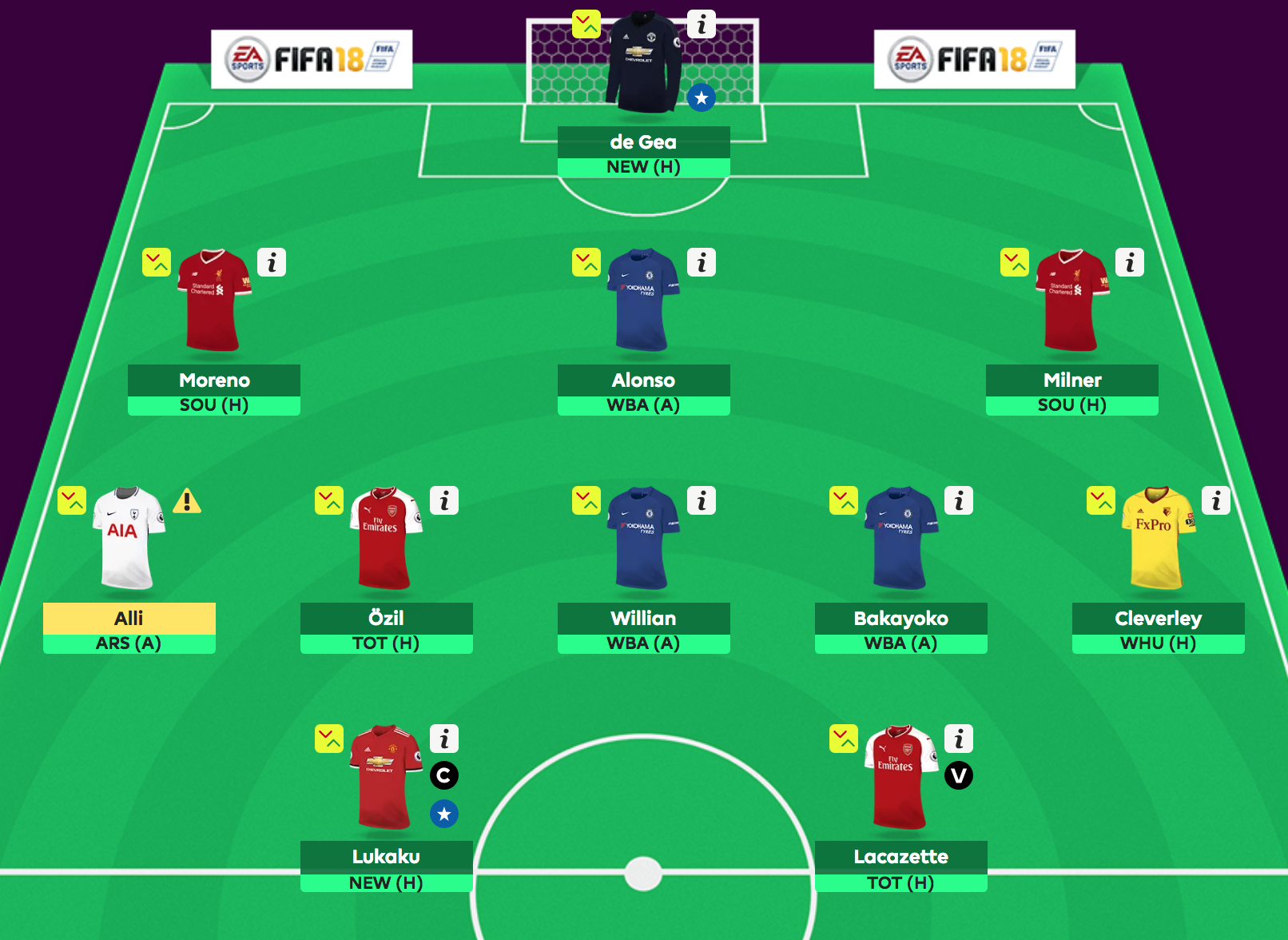 The players in our team continue to drive the social media conversation, even if they aren’t necessarily scoring a lot of fantasy points. De Gea, Lukaku and Lacazette in particular are regularly near the top of our “Most Talked About” leaderboard, whilst Ozil and Bakayoko frequently cause debate and controversy on Twitter. On the pitch it’s been hit and miss, but we will have to wait and see how the team get on after the international break!

If you want to see how our Sports Hub can drive content for your site, get in touch with Ali at alistair@blurrt.co.uk