Our incredible Sports Hub has been bringing you insights into the Premier League on social media all season, mostly focussing on the players. Collecting on every single player in the Premier League seems only right – they are the stars of the show after all – but did you know we also collect ever tweet about every manager too? This week saw some of the highest levels of conversation surrounding the bosses this season, with Arsene Wenger and Antonio Conte being talked about more than every single player (apart from Nemanja Matic, thanks to his winning goal for Manchester United last night). 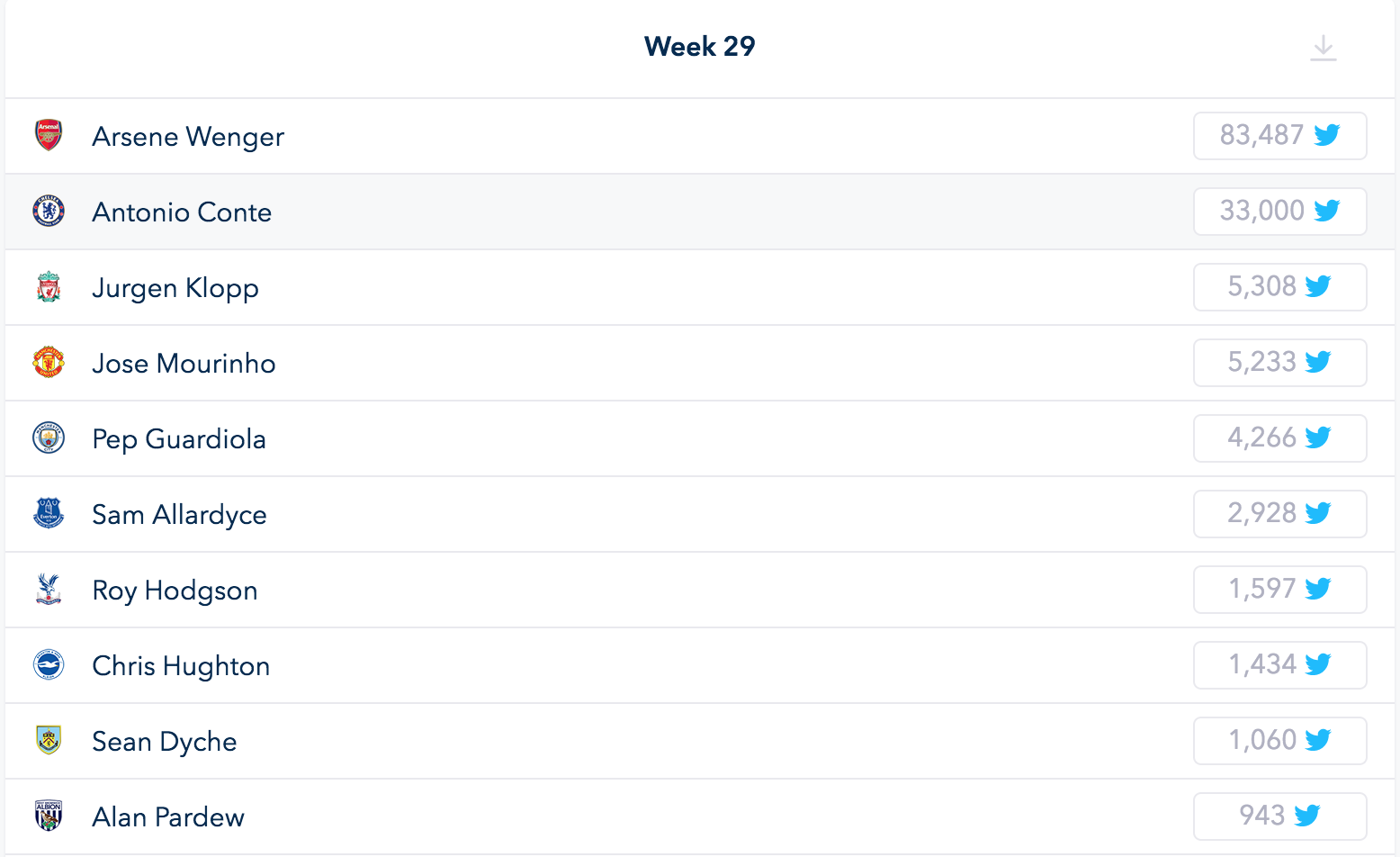 We thought it would therefore be a good idea to do a manager special, taking a look at what the fans were saying about their team’s boss and how fans were feeling about the run-in as their team battled for survival, Champions League football, or just a sense that everything wasn’t completely hopeless…

That pun might have been too oblique, even by my standards, but to say that Wenger was unpopular this weekend is undoubtedly much easier to understand. After Brighton beat his Arsenal side 2-1, bringing their run of consecutive defeats to 4, fans took to social media to lambast the longtime manager. 83,487 tweets about Wenger was around 50,000 more than the second most talked about individual this weekend, demonstrating just how many fans weighed in to voice their opinions. Emotionally, results were slightly more unexpected. Of course, anger was the most common emotion, with 43% of emotional responses sharing their annoyance at the French coach. Sadness made up 10%, with “haha” making up a further 11%. Love and like made up 17% and 13% respectively, underlining the respect Arsenal fans used to have for their longtime boss and the high esteem he used to be held in. Around 18% of the entire conversation included the phrase “wenger out” or #wengerout. Twitter users certainly believe it is time for the old boss to finally go…

Antonio Conte must have hoped the worst was behind him when his side threw away a one goal lead against Manchester United last weekend to lose 2-1, but a clash with Manchester City this weekend and an upcoming second leg in the Champions League away in Barcelona will have kept the Italian in low spirits. His side were appalling and dull against City, losing 1-0, leaving fans to be even more negative about him than they were the previous week – somehow! 29% of tweets about Conte were positive, down 3% on the United game, underlining a quite remarkable trend for a top 6 manager. Fan sentiment could hardly be lower, yet somehow the Chelsea boss plows on without being sacked. Truly a modern miracle (especially at Chelsea).

Chris Hughton might be one of the most underrated managers in English football, and his fine tenure in charge of Brighton reached another high point as they defeated Arsenal. Hughton is undoubtedly a fan favourite down on the south coast, and with not long left in the season there’s a distinct possibility he’ll keep his side up, possibly even comfortably. The plaudits poured in for the Englishman, with 93% of conversation about him being positive.

What a brilliant job Chris Hughton has done and continues to do at Brighton. He does it on the quiet – he’s not an egotist & doesn’t court publicity – but as well as being a deeply nice man, he’s a bloody good manager.

Chris Hughton has done an exceptional job. He has brought joy to his club and it is reflected in the way that they play as a team. #BHAARS

Sam Allardyce probably won’t see his time at Everton last much beyond the end of the season, if he makes it that long. The former England boss has done enough to keep Everton up after their unbelievably bad start, but that impressive recovery has now turned into apathy and poor performance after poor performance. His side were so bad on Saturday that they let Burnley do something they’d previously failed to do in over 60 attempts: come from behind and win in the Premier League. Needless to say, the critics were out for Allardyce. A massive 72% of emotional reactions demonstrated anger, an overwhelming proportion and demonstrative of just how fed up Everton fans are with his less-than-inspiring leadership. 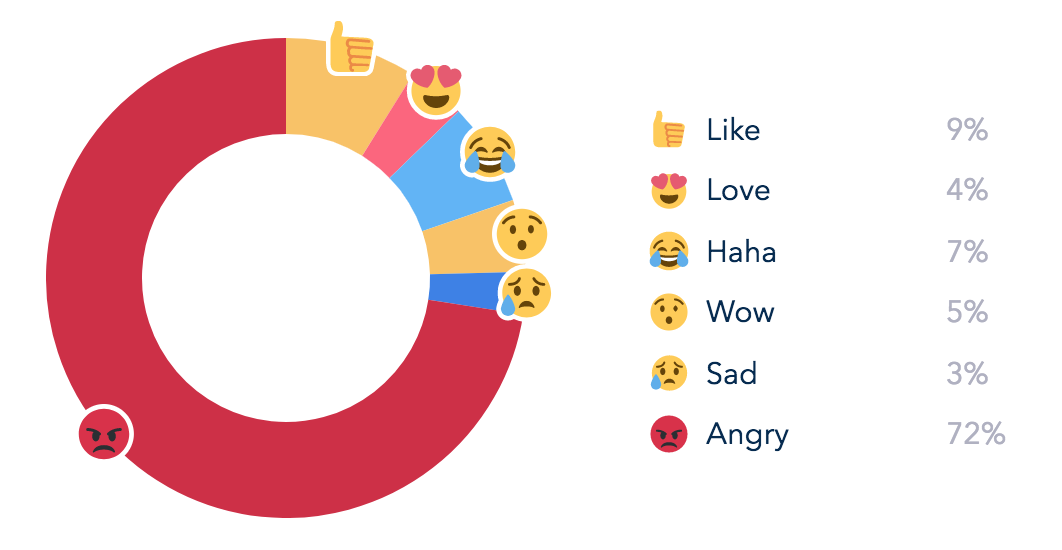 The United boss has dealt with plenty of criticism over his long career, but the sound of United fans complaining even though they are winning will probably still be reasonably new to him (at least, when sat in their dugout. I’m sure he noticed from other dugouts!) and despite the 3-2 win against Crystal Palace on Monday night, the Portuguese boss wasn’t the most popular person with the Red Devils faithful. Just 42% of tweets about him were positive, down 15% on the previous week when his side beat Chelsea, demonstrating that a lacklustre and ultimately lucky victory against a team in the bottom 3 just isn’t good enough for a club with the history and reputation of United.

Let’s not pretend like it wasn’t a shocking and lifeless first 65 minutes. Jose Mourinho’s subs changed the tempo and intensity, but Manchester United have to start better from the off. Can’t be so lifeless to begin with.

Jose Mourinho deserves huge credit. Made the right changes and the right moments and the lads turned it around. Huge three points. #mufc