Another week goes by in the Premier League, and another week goes by with Blurrton Albion sitting in sixth in the office fantasy league. I decided to mix it up a bit this week and play our “Free Hit” wildcard, allowing us to change the team for one week and then see it return to our original squad for the next Game Week.

Here’s the league table, to start things off:

Last week the team scored a reasonable 60 points, with captain Mesut Ozil and defender James Milner joint top scoring with 12 points each. Goalkeeper David de Gea scored 9, with Romelu Lukaku adding 5 points in attack. Marcos Alonso and Alberto Moreno both kept clean sheets to add 6 points each to the total. Tiemoue Bakayoko scored 3 points thanks to Chelsea’s clean sheet against Bournemouth. Dele Alli and Laurent Depoitre both picked up 2 points, with Willian adding a single point. The bench luckily had no big scorers on it, with Tom Cleverley adding 2, Ahmed Hegazi getting 0 and Arthur Masuaku actually scoring -1!

So who’ll be coming in to the side this week?

Using our Sports Hub, we picked a brand new squad of players for this weekend’s fixtures. David de Gea (3,548 tweets), Joel Coleman (1 tweet), Dele Alli (5,679 tweets) and Romelu Lukau (19,587 tweets) were the only players to stay in the team this week, as we continued to abide by the “no more than 3 players from one club” and no players who are registered as “unavailable” rules. As a result we only had space for one more Manchester United player, which this week means that Anthony Martial (53,479 tweets) joins the squad as the most talked about player in the Premier League, thanks to his winning goal against Spurs.

In defence, 5 new faces can be seen: Sead Kolasinac (8,944 tweets), Dejan Lovren (4,361 tweets), Antonio Rudiger (1,222 tweets), Jonjoe Kenny (1,099 tweets) and Ragnar Klavan (1,299 tweets). Kolasinac scored one and assisted another as Arsenal came from behind to beat Swansea, Lovren avoided the blame for once as he pulled up injured in the warm up for Liverpool, whilst Rudiger had a good game as Chelsea kept a clean sheet against Bournemouth. Kenny scored a horrendous own goal (later credited as a Gray goal, but still got Twitter going), and Klavan was called up to replace the injured Lovren.

Diame was also not well received by the fans after his performance for Newcastle, getting plenty of stick for being really, really average…

Anyone fancy starting a crowdfunding page to buy out Diame’s contract?

Up front, Daniel Sturridge (10,003 tweets) scored his 100th career goal as Liverpool beat Huddersfield at Anfield, whilst Glenn Murray’s (1,159 tweets) goal on Sunday squeaked him into the team ahead of Swansea favourite Tammy Abraham. 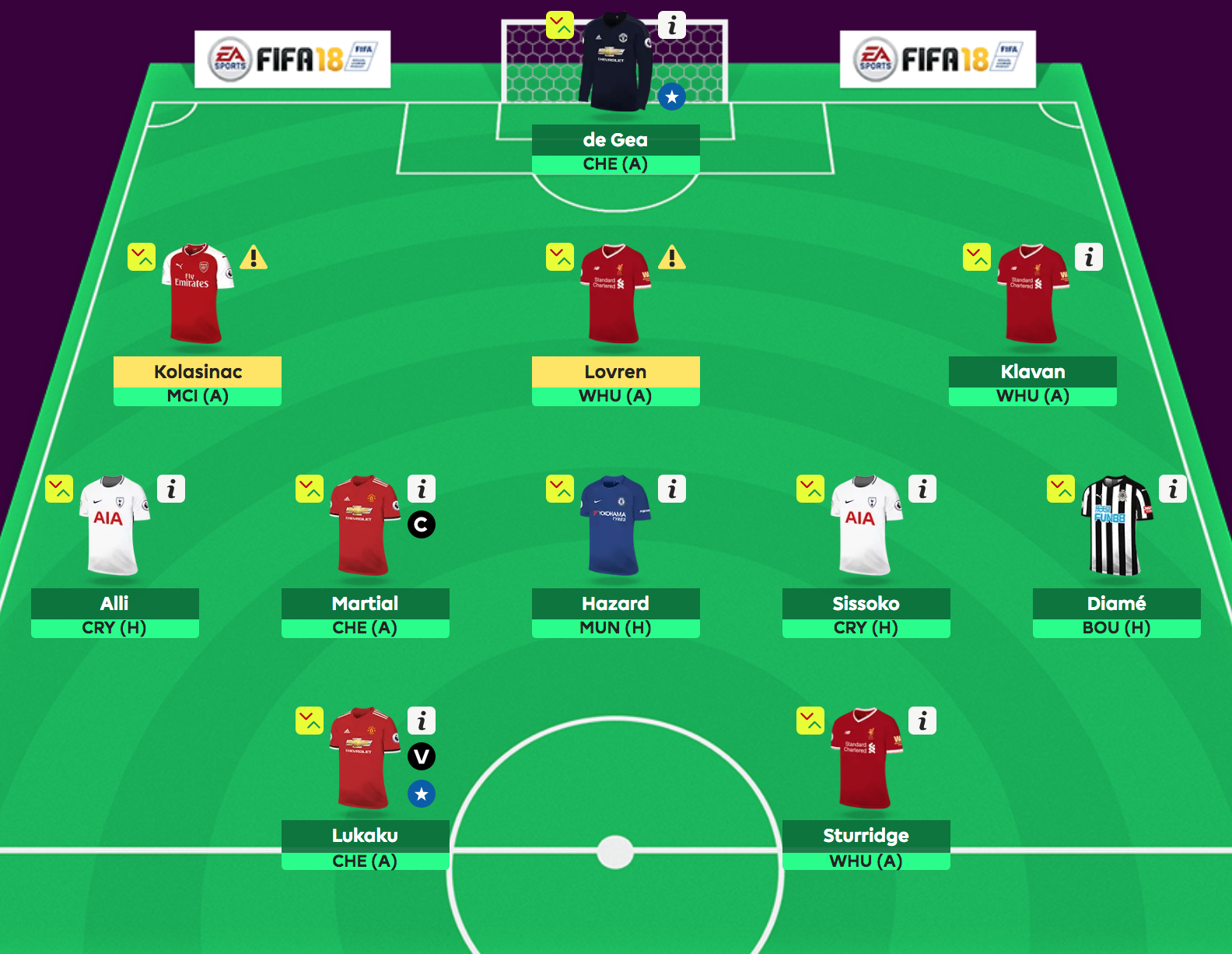 So the team for the next match is out! After this week it’ll be the international break, so depending on how the new look squad does this week we might use that extra time to play our first proper wildcard of the season!

To find out more about how our data allows us to generate really interesting content like this, get in touch with Ali at alistair@blurrt.co.uk