It’s time to open door 4 of the Blurrt Advert Calendar, where we are ‘dice’-ecting the conversation around the best TV adverts this festive season, and pitting them against each other to answer the question: who will win the #BattleOfTheChristmasAdverts?

Today’s advert is from a company who prides itself on 24 ‘carrot’ gold service and produce, winning Good Housekeeping’s Favourite Supermarket in 2017, and providing a consistent range of award-winning wines and spirits. It can only be Aldi, the supermarket who can’t resist taking a ‘dig’ at other companies Christmas adverts. Over the years, Aldi has parodied John Lewis twice, and their “Like brands, only cheaper” campaigns have run through the festive period in previous years. Their 2013 campaign focused on parodying a Perfume advert, where a man lies seductively on a bed, comparing a leading brand of Champagne with their own-brand version.

Last year saw a swing from the usual live-action Christmas advert, providing an animated story following Kevin the Carrot, giving consumers a more sentimental advert while still implementing their custom brand of humour. Possibly due to its popularity last year, they have ‘dug-up’ Kevin for another year giving him another story (and a love interest!).

Kevin the carrot is the best Christmas advert#Aldi

The advert was released in its entirety on the 7th of November, and conversation saw a massive increase of over 1900%. The advert continues the story of Kevin the Carrot, meeting him where he was left last year as the nose of a snowman. He is swept onto a steam train, where a sumptuous meal awaits the passengers. Kevin weaves in and out of the food, narrated by Jim Broadbent once again, and sees a female carrot at the end of the table. He makes his way over, but his clumsy nature means he has to save Katie the Carrot from a pea attack. He lands in her arms and a love story is born. In our sample data, there was 100% positive sentiment, and 85% of the sample tweets collected showed emotion bearing words, with the highest scoring words being ‘excited’ and ‘love’.

In the days following Aldi’s advert release, conversation increased by 3.5%. Conversation was relatively up and down, dropping by 57% on the 9th. However, on the 10th, it increased by 98%, which coincided with the day John Lewis released their Christmas Advert. Almost 40% of the tweets that day mention the John Lewis advert, and of that, over 60% of those tweets mention they prefer Aldi’s advert over John Lewis’. This suggests that consumers prefer humour in their ads rather than sentiment.

That was poor…….365 days and you had one job when it came to the advert…..fire the creator, there is no Christmas spark! Aldi and M&S are better, sorry. #dissapointed #letdown

Conversation petered out over the course of the rest of the sample data, regardless of the fact that Aldi released 5 more mini-ads featuring Kevin the Carrot. Over the period of 8th-21st November, Aldi’s negative sentiment was mostly directed towards John Lewis. Users mentioned that John Lewis’ advert was a ‘#letdown’ and Aldi had ‘outdone’ the big retailer. With a positive sentiment of 68% (12% negative, 20% neutral), users took to Twitter polls to express their favourite Christmas advert.

The earliest mention of the Aldi Christmas advert was back in August 2017, where a user connected Aldi’s sense of humour with last years John Lewis Christmas advert. When a fox was seen jumping on a deck chair, the comparison with Buster the Boxer on a trampoline was evident.

Aldi Christmas advert being filmed as I write….. https://t.co/hOrMt7c2SN

Anticipation, although low in volume, was relatively positive. It’s fair to say that anticipation doesn’t match John Lewis or Debenhams, however, in terms of supermarket shopping, it’s leading the charge above Tesco.

Once the advert was released there was a 75% positive reaction and only a 9% negative reaction (16% neutral). The top emotion word was ‘love’, featuring in nearly 23% of all Aldi’s mentions on Twitter. A top trending topic was #KevinAndKatie, which was mentioned in 16% of our sample data. This shows that custom hashtags gain mentions easily and generate more conversation. Love was also the biggest emotion with nearly half (46%) of all tweets tagged with an emotion being tagged as ‘love’. 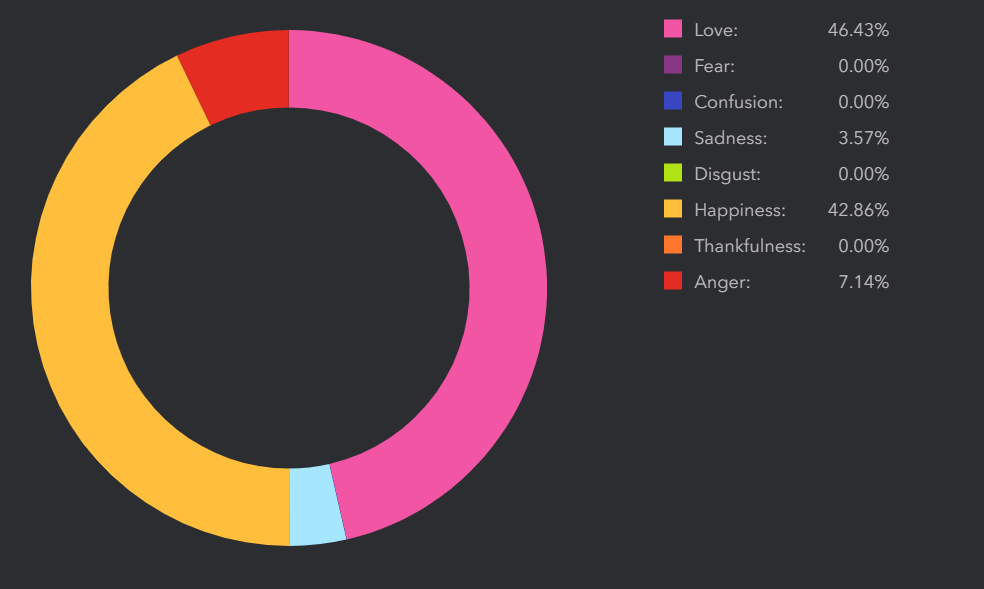 Finally, how popular was it? In our sample data, Aldi featured in only 3% of tweets, proving it wasn’t as popular or as talked about as the other supermarkets or department stores.

So how does Aldi compare to our other big-hitting adverts? Aldi wins the anticipation battle against Tesco but isn’t anywhere near Debenhams or John Lewis. Aldi seems to be second in the running when talking about emotion, as 56% of their sample tweets contain emotion, with Debenhams still in the lead at 77%. Aldi is also at the bottom of the table regarding volume, however, with such a large amount of positive reaction to Aldi’s advert, it can’t be denied that Twitter users certainly prefer Aldi’s Kevin over John Lewis’ Moz. It’s certainly not the first time Aldi has been the direct competitor with John Lewis, with 2015 parodying John Lewis’ #ManOnTheMoon campaign. Maybe John Lewis just doesn’t ‘carrot’ all…

Tune in soon to open door five of our Advert Calendar, where we will be opening our final door!